The past four days we were in the Outback. I’ll admit I was a little skeptical of the whole situation but I didn’t want to leave. Tyrone (cattle) Station is located west of Brisbane about an hour away from Charleville.  So this is going to be a long post so bear with me. I hope you get just as passionate as I was about the land.

5am we are on the bus heading to the outback. Approximately 12 hours later with a total of four stops we make it to our destination. The scenery was about the same most of the ride there, large fields with the occasional herd of cattle in the road. I did spend most of this trip looking out the window and my attention was grasped most of the way. We got further out west, the greenery quickly faded into the rich red dry dirt. The last 45 minutes down a dirt road was spent catching sightings of emus, cattle, and kangaroos. Unfortunately we also saw kangaroos that had been hit and killed laying on the side of the road. This is reality out here.

Tyrone Station is more than lovely. The man made products such as building and houses are not as pleasing to the eye, yet the land simply blew me away. Land of such an amazing burnt red that goes for acres (40k) beyond where my eyes can see. The billabong, soft soil from the unusual rain with the gift of wildflowers along the land were surrounding me everywhere I went. The animal tracks to follow in hopes of finding them were all over and you would get the surprise of seeing them in the distance.

We were greeted by Grace, the owner of the land and her mother, Grandma. (Still don’t know Grandma’s name) They had dinner all ready for us which was delicious followed by a lava cake and ice cream for dessert. We ended the evening sharing three things about ourselves. 1. an embarrassing story. 2. Something God is teaching you or something you’ve been asking God and 3. Something the group should know about you.

Night time is unbelievable. The air is so clear of nothing but stars and planets. Not one plane flying through the vast darkness lit up by the bright moon. The still of the night reminded me of of home where I only hear the crickets chirping, leaves rustling in the calm breeze with the occasional night bird. I am beyond imagination in this place.

The sun rises around 6am here and it’s gorgeous. I was on breakfast duty with a few other students and we made a killer spread of toast, eggs, and bacon. After breakfast, Grace and Troy (our wonderful bus driver) drove us out to collect firewood with us on the back of them. 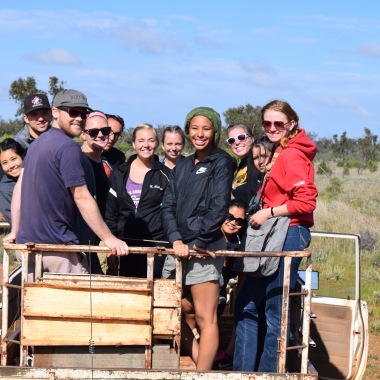 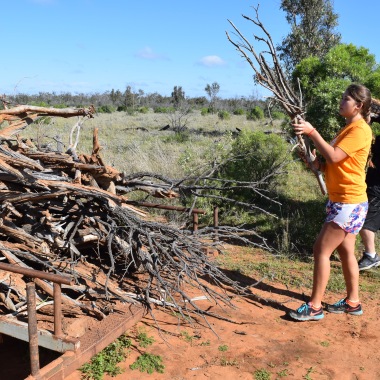 Rachel (one of my best friends) working hard!

Once we collected the firewood, we dropped off the trailer full and went on another excursion in the utes to see and learn about the land. First stop was near cattle and it really started my day off wonderful. 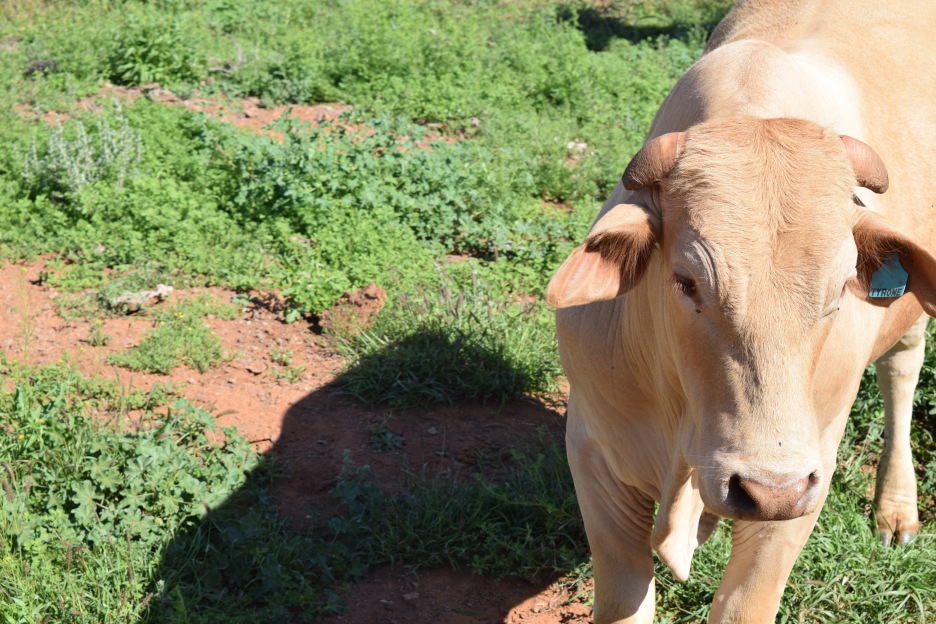 We learned a little history about the land. Mark and Grace bought the land in 1992 as a sheep farm. There were around 3,000 sheep when they moved in. It wasn’t until almost seven years ago that they switched to only cattle. They have had up to 500 head but currently only have 50 of their own with other people renting out land. The sheep were too much to maintain. They had to be sprayed for flies, sheared, tagged as well as their tails clipped. They clipped their tails because it gets to moist around that area the flies get in there, lay their larva and actually eat the sheep alive.

The ride ended at the other end of the property where there is a lot of empty buildings and it’s been left with old metal thats not rusted. Mark and Grace no longer live on the property as they pastor a church one hour south of Brisbane so their daughter lives there full time. There was so much to see so we got to hop off the ute and explore a little. 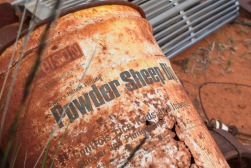 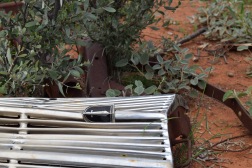 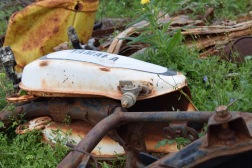 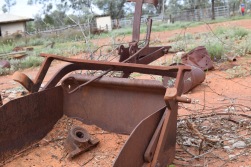 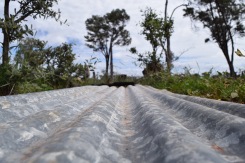 While walking through the main building, a stench became stronger. As many thought it was fresh animal poop, it turns out that decomposing animal with teeth and claws was a kangaroo caught by a wild dog or what we call Dingo. That was unpleasant to many and no pictures were recorded.

After lunch and a bit of free time, the rest of the afternoon was spent in ‘class.’ Our lecturer for this class is Chris Gilbert. He’s a wonderful Australian man who actually taught with his wife at Gordon. He used to live in the outback on a farm that worked with teens who needed some behavioural correction so he had a lot to offer about the land.

After class we had dinner and that’s when I got to talk with Grandma. She and her husband used to be missionaries in Papa New Guinea so of course I asked her about that. Her response was all people of Christ are missionaries, just in a different place. Preach Grandma, preach! She gave me a lot of wisdom on following Christ and what stuck with me is “God has no grandchildren, you’re either his child or you’re not”.

Before our fire, Grace was willing enough to share her story with us. First she spoke about her passions of foster care and Reaching Another In Need (R.A.I.N.) project that she started. This basically allows for anyone to purchase a cow for around $800 (while they sell for $2000). This cow would be kept for breeding and the bulls she bred would be sold bringing money back into the organisation. The cow would be kept for the entire breeding life and then sold. The cow’s calf would take their place and the process continues. Money went to churches in need especially theirs in Charleville.

Land brings many challenges and I won’t go on about everything we learned but I’m so passionate about it, and I hope you are invested enough to ask me more about it.

Morning was spent in devotions and worship and then another ‘class’ session. There was a few guys who keep their cattle on the land there to muster them up. They use dirt bikes which they took a while to get started, as well as some crazy cool mini helicopter looking thing. After class I got to see some horses that someone keeps on their land as well as the cattle.

I loved seeing the horses, it reminded me of the Holland Project and I’m eager to get riding again.

The afternoon/evening was spent on a bliff. It’s kind of like a cliff. On the ride here we saw many kangaroos and even wild goats! We had some time to ourselves then went to explore the area on a little hike. 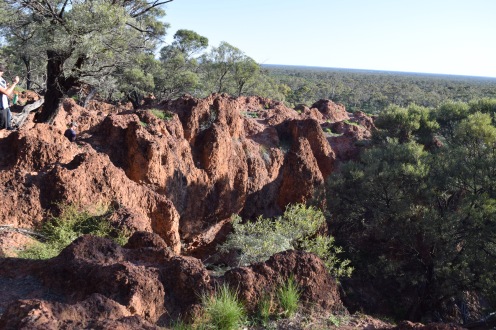 There were bones and bones in these mini caves 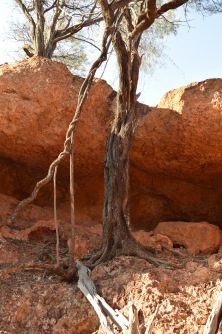 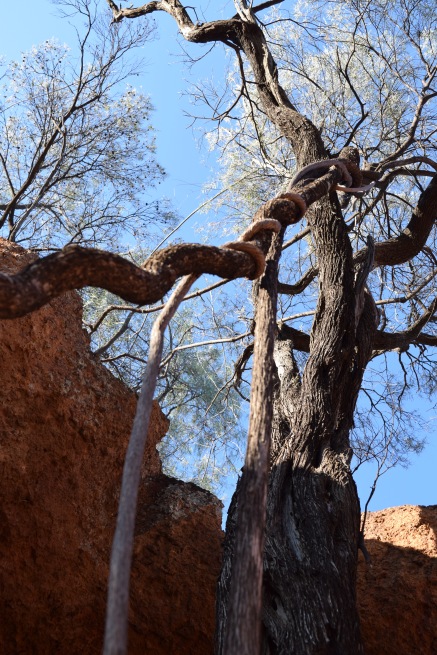 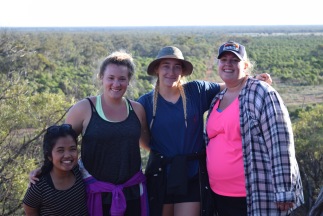 These girls are so wonderful

The evening was our last one there. I spent it enjoying good times and conversations with people around me. The stars and moon are amazing out there. Shooting stars are all around as well. I was so still during our last night hearing the crickets chirping, birds singing, and frogs croaking. The cows belting away in the field as laughter erupts from the students still awake. I want to go back and never leave.